'Atlantic Europe in the Metal Ages (AEMA): Questions of Shared Language' — history of the project to 2013

The multidisciplinary project, which began as 'Ancient Britain and the Atlantic Zone' project (Spanish acronym: ABrAZo), explores alternative models to address a long-standing and fundamental defect in Celtic Studies. The most widely known and repeated explanation for the origin of the Celtic languages is that they spread from a compact core region around the upper Danube beginning in the earliest Iron Age, that is, about 800–750 BC. This model clearly does not work because many regions that had Celtic languages in ancient times show little or no cultural inflow from west-central Europe during the Iron Age. The traditional model does not explain the Celticity of Ireland well, but the most acute disparity is in the Iberian Peninsula, where there is direct evidence of Celtic languages already in the Early Iron Age, but alongside a completely different sort of cultural background. It is time to explore an alternative theory, namely that Celtic was already spoken in Europe's Atlantic west in the Bronze Age, that this was perhaps the region where Celtic first split off from the Indo-European parent language.

The project kicked off unofficially with the stimulating one-day forum, 'Celticization from the West', held in the packed venue of the Drwm in the National Library on 7 December 2008. This forum was the basis for the influential collaborative volume Celtic from the West: Alternative Perspectives from Archaeology, Genetics, Language and Literature (Oxbow Books, 2010, 2012), edited by Barry Cunliffe and project leader John Koch. Celtic from the West has now gone through two printings and was nominated as the Current Archaeology Book of the Year for 2012.

The project began formally in April 2009 with University of Wales funding and a British Academy small grant. Professor John Koch was joined by Dr Catriona Gibson, an expert in the Iberian Bronze Age, and Indo-European philologist Dr Dagmar Wodtko, with Martin Crampin preparing the maps, tables and images of inscribed stones for Celtic from the West and subsequent project publications.

A grant application submitted to the Arts and Humanities Research Council (AHRC) in 2010 was highly rated and favourably reviewed, but was not funded. The resubmitted application, entitled 'Atlantic Europe in the Metal Ages: Questions of Shared Language', secured a grant of £689,167, to be spent over three years, 2013–16. This expanded and fully operational research project commenced in April 2013. It includes five principal institutions: the Centre for Advanced Welsh and Celtic Studies as leader, the School of Archaeology of the University of Oxford, the Department of Digital Humanities of King's College London, Bangor University, and the National Library of Wales. Major contributions as project partners are being made by National Museum Wales in Cardiff, the Royal Commission on the Ancient and Historical Monuments of Wales and Oxford Archaeology.

There is a team of nine researchers with full-time or substantial time commitments to the AHRC-funded project. Principal Investigator John Koch at CAWCS is joined by co-investigators Professor Sir Barry Cunliffe (Oxford), Professor Raimund Karl (Bangor) and Paul Vetch (KCL). 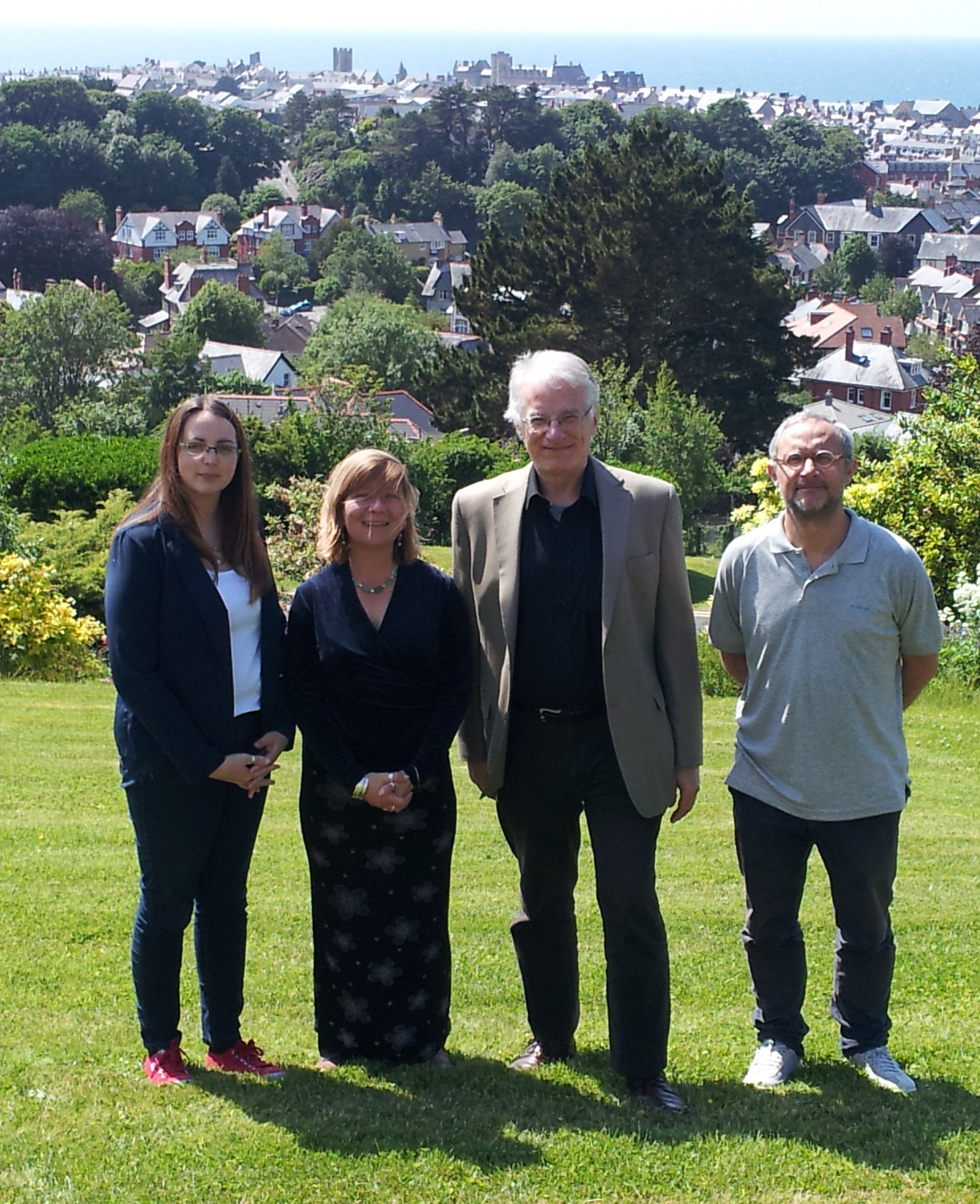 Irish Bronze Age expert Dr Kerri Cleary came aboard as an AHRC-funded research fellow in April 2013. Most recently prior to this, she was project coordinator and archaeological editor for a monograph detailing the excavation of 71 new sites dating from the Mesolithic to the post-medieval period, many of which are of national importance. The resulting publication (A Network through Time: Archaeological Discoveries on Six Gas Pipelines in County Cork) will appear in early 2014. Kerri has also been part of research teams engaged in ongoing work at the famous Irish archaeological sites at Lough Gur, Co. Limerick, and Knowth in the Boyne necropolis in Co. Meath. Immediately before coming to the Centre, she served a three-year appointment on the board of directors for the Institute of Archaeologists of Ireland (IAI) and was also council member and member of the editorial board of the Cork Historical and Archaeological Society.

Also arriving in April was Dr Fernando Fernández Palacios of Madrid, an expert in the pre-Roman languages of the Iberian Peninsula, with published interests extending to Roman Britain, the Picts and the ancient Near East. His earlier work includes directing excavations at Roman and pre-Roman sites in north-central Spain and assisting Professor Javier de Hoz in the Hesperia project, which has created an online database of Palaeohispanic linguistic evidence.

Funded by the AHRC grant, Dr Peter Bray is based at the Research Laboratory for Archaeology and Art History (RLAHA) in Oxford. He is an expert on the sourcing of metals used in the Copper and Bronze Ages. He is compiling imposing amounts of evidence that will illuminate the extent and nature of international connections in later prehistory. In the years preceding joining the team, he was collaborating with Professor Mark Pollard, Director of RLAHA, leading to the important publication: 'A new interpretative approach to the chemistry of copper-alloy objects: source, recycling and technology', Antiquity, 86 (2012), 853–67.

Neil Jakeman brings a range of experience in the Digital Humanities and special expertise in Geographic Information Systems (GIS), including historical mapping. He is based at KCL, where he is constructing the database in which the project's extensive collections of archaeological and historical linguistic evidence from across the Atlantic region are being compiled. The result will be a major resource to be made available in the later stages of the project to other researchers and the public. Accessible on the internet, the database will be maintained by the National Library after the project is complete.

Catriona Gibson continues with the project on a half-time basis, dividing her time between the Centre and working as a consultant with commercial archaeological units in Scotland and England. Her work outside the Centre includes writing up a major Iron Age ritual and metalworking site in Orkney, Neolithic settlement sites in Shetland and excavations at a unique Late Neolithic henge complex site in Somerset, funded by English Heritage. She is the co-editor and contributing author of the innovative 2013 volume published by Oxbow (Memory, Myth and Long-term Landscape Inhabitation) that melds current research agendas in archaeology with recent major discoveries coming out of developer-led fields of inquiry. Catriona's work with the project focuses on the Copper and Bronze Ages in the Western Iberian Peninsula and more generally on Britain.

As an output of the project a multi-authored volume appeared in February 2013: Celtic from the West 2: Rethinking the Bronze Age and the Arrival of Indo-European in Atlantic Europe, edited by John Koch and Barry Cunliffe. This collection was based on the project forum held in Oxford in 2010. This volume includes cutting-edge work on the Beaker phenomenon, studies by the leading proponents of the two main theories of the Proto-Indo-European Urheimat and early dispersal (J. P. Mallory for the Gimbutas/Mallory 'Kurgan' theory and Lord (Colin) Renfrew for the Anatolian Neolithic theory), and a report on the remarkable, newly discovered Late Bronze Age / Iron Age site at Cliff's End near Richborough, Kent.

The project held a successful day-long forum at the National Library of Wales in November 2012. With a programme of distinguished researchers, the topics focused on later prehistory (third–first millennia BC) and ranged widely between disciplines: archaeology, genetics and historical linguistics. It is planned that the contributions will find their way to print in the project's growing and well-received series of multi-authored volumes, which began with Celtic from the West and Celtic from the West 2.

The first edition of project leader John Koch's Tartessian: Celtic in the South-West at the Dawn of History (2009) sold out in 2010. Owing to the many recent discoveries, including the longest text in the corpus found at Mesas do Castelinho in September 2008, a greatly expanded and fully revised edition was published in January 2013.

John and Fernando both attended and presented communications to the three-yearly Coloquio Internacional de Lenguas y Culturas Prerromanas de la Península Ibérica, held in Valencia, Spain, in October 2012. The proceedings appeared in 2013 as a volume of Palaeohispanica, the leading journal of research on pre-Roman Spain and Portugal.

John has also continued with his long-term interests in early Welsh poetry, giving a lecture on 'Y Gododdin' in the Drwm in March 2013. He published another book on the Cynfeirdd poetry in 2013.